He has served his country with songs and sermons. 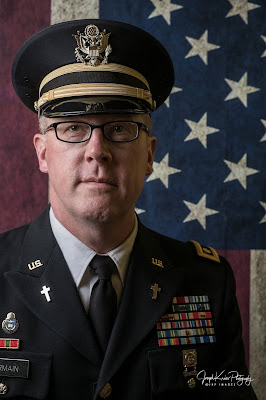 Winnebago native and 1990 Blue Earth Area High School graduate Cory Germain taught middle school music in Iowa for a short time following college, “but, it wasn’t a good fit for me at the time,” he recalled.
Having heard several military bands perform over the years, he decided to carry his love of music into the service as a percussionist. After scoring an audition with the United States Army Band, Germain enlisted in 1995 and headed to 10 weeks of Army basic training at Fort Jackson, SC and Advanced Individual Training at the Armed Forces School of Music at Little Creek Naval Amphibious Base in Norfolk, VA.

Germain’s first duty station was at Fort Knox, KY between 1996 and 1998 with the 113th Army Band.  Bands throughout the Army are comprised of active duty soldiers who play a variety of music styles to inspire Soldiers, foster the support of citizens, and promote national interests at home and abroad.
During his time in Kentucky, he met his future wife, Ellen, while attending a Presbyterian congregation near the Army base. Within the year, the two were married. But the reality of military service quickly hit home when the newlywed solider was shipped to Seoul, South Korea with the 8th Army Band for a yearlong tour.

While stationed in Korea, Germain remembers becoming involved in the base chapel services and particularly interested in the work of the Army Chaplains. He explained that he was born and raised in the church and had stayed active with his faith in the Presbyterian Church throughout high school and college. The seed was planted.

Following a short leave in the U.S., he was excited to embark on his next assignment to the 76th Army Band (formally known as the V-Corps Band) in historic Wiesbaden, Germany. This time his wife Ellen was able to join him.  During their three-year stay in Germany, between 2000 and 2003, Germain’s unit also relocated to Manheim, Germany. “I greatly enjoyed the frequent trips to perform with the band throughout Europe, and even Cairo, Egypt one Fourth of July, he remembered.

After Germany, the young family returned for another tour with the 113th Army Band at Fort Knox, KY. During nearly ten years of active duty, Germain served as a percussionist, vocalist, and small-ensemble leader within Army bands.  As he rose in rank to Staff Sergeant, he served additional duties within various bands as an administrative clerk, Nuclear Biological and Chemical Non-Commissioned Officer, Unit Security Manager, and Squad Leader.  Throughout his Army music career, Germain had reoccurring thoughts of combining his faith in God with his Army career. “During my time overseas, the Army had been recruiting heavily for chaplains, as they were in short supply to adequately serve the troops,” he said.

After this second stateside assignment, he stepped away from active duty in June of 2005 to attend seminary in Louisville, KY.  He remained in the Individual Ready Reserve and received his commission as a Second Lieutenant in the US Army Reserve Chaplain Candidate program at the end of January 2006.  He received his Master of Divinity degree from Louisville Presbyterian Theological Seminary in December 2008 and served as an Army Chaplain with Army Reserve units in the Kentucky and Tennessee area.  His plan to return directly to active duty as an Army chaplain was never realized, originally because he lacked the required years of experience as a fulltime pastor, and later because of his age. 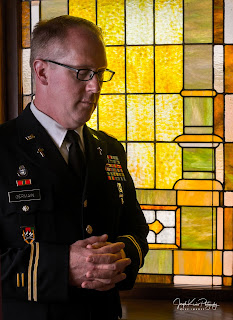 By 2010, a chaplain assignment came open with an Army Reserve unit being deployed to Afghanistan. After a lot of prayer, Germain said he felt it was the right path for him. He deployed to Afghanistan as chaplain of the 419th Movement Control Battalion from Peoria, IL.  “I got to travel all over Afghanistan to provide counseling and services to the soldiers in my battalion, plus I was able to combine my love and skills in music with my chaplaincy,” he said. Germain played in praise and worship bands during church services and was able to lead Sunday services at the base chapel every other week.

His Southwest Asia tour ended just before Christmas 2010, and he happily rejoined his family, who had transitioned to Midwest life in Winnebago before the deployment to be near his parents.  In the summer of 2011, Rev. Germain answered the call to become pastor of First Presbyterian Church in Pipestone, MN. He transferred from the Army Reserves to the Minnesota National Guard’s 1- 151st Field Artillery Battalion based in Montevideo, MN while he served the church in Pipestone for three-and-a-half years. Soon after ending his ministry there in Pipestone, the Army came knocking. “I was deployed again, this time to Kuwait with the Guard’s 682nd Engineer Battalion from Willmar/St. Cloud,” Germain remembers.

Since returning from this most recent deployment in mid-2016, Rev. Germain has been the pastor of First Congregational United Church of Christ in Fairmont, having applied for the vacant pastor position and interviewed via Skype while still deployed in Kuwait.  He served briefly with the 34th Infantry Division in early 2017, then took his current position as the Brigade Chaplain of 84th Troop Command, headquartered in Cambridge, MN.

Chaplain Germain and his wife Ellen have two teenage children, Emma and Cameron.


Posted by Joseph Kreiss Photography at 6:24 PM No comments: 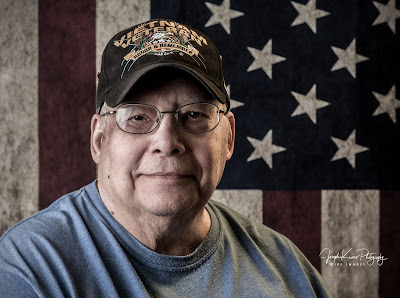 Randy Childers was 20 years-old when he enlisted in the U.S. Army in 1967. His first year in the military was spent in Denver, Colorado, training for his Military Occupational Specialty (MOS) in medical equipment repair. From the Rocky Mountains, Childers was shipped to the Army’s Landstuhl Field Hospital in Germany where he worked his same MOS.


In June of 1969, Childers left Germany for Vietnam and was assigned to the 45th Portable Surgical Hospital. The Army medical facility was in a Forward Combat Area in Tay Ninh Base Camp in South Vietnam. “I did repairs to the medical equipment and I also ordered medical supplies,” he remembered. “I would help carry the wounded soldiers from the in-coming choppers.”
Childers recalls the base camp where the field hospital was located was quite large, “about the size of Truman, MN,” he said. “Because we were near the frontlines, we drew a lot of attention for the V.C. (Viet Cong). The base was subject to frequent attacks by enemy rockets and mortar fire,” he added.
By June of 1970, Childers had completed his war duty and headed back to the States to be discharged. He returned to the area and in 1974 moved to Fairmont to start his career with 3M. He retired from 3M after 27 years of employment. 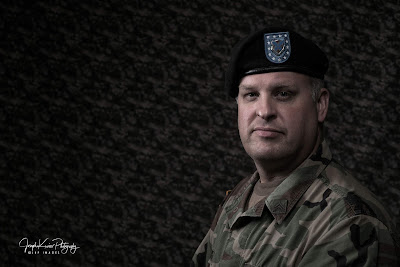 To get the needed financial help during college years at South Dakota State and University of Mankato, 1993 Fairmont High School graduate Cade Hartwig made the decision to join the U.S. Army National Guard. Hartwig did his basic training at Fort Benning, Georgia, then onto 13 weeks of training with track-mounted, Vietnam-era 4.2-inch mortars.

Receiving benefits from the G.I. Bill wasn’t the only reason Hartwig became a soldier. His dad is a military veteran, having served in the U.S. Navy in submarine duty.
“I was loving what I was doing,” Hartwig admitted. “After college was done in 2002, I re-enlisted in the Guard.” More training stateside included combat training with simulated weapons and ammo.

Hartwig had been working as funeral director in Hutchinson, MN when his Guard unit got called up and deployed to Kosovo in the Spring of 2004 for two tours of duty with the HHC2/135 Infantry during the Global War on Terrorism. Hartwig also spent time at Fort Polk, Louisiana, helping train soldiers going to Afghanistan.

Hartwig was appointed Mortuary Affairs NCO at the Kosovo Battalion Operations Center. “I also was the Battle NCO, communicating with combat squads in the field,” he said.
By 2006, he eventually went back home and to the regular routine of work, summer guard training and drills. “I was offered to go back to Kosovo with the Guard, but we were so short-staffed at my regular job that I didn’t want to put my employer through that again,” Hartwig recalled.

He moved to Fairmont in 2008 when he accepted a job with Lakeview Funeral Home. Hartwig is married with four children. He is also a volunteer firefighter with the City of Fairmont Fire Department. 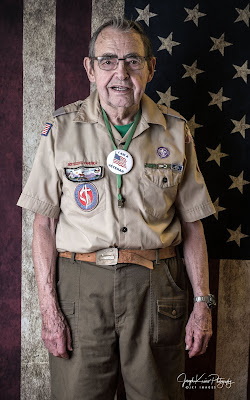 The Korean War had just ended when Richard Adams joined the Army in the fall of 1953. “They sent me to Fort Lewis for basic training then I shipped out,” he remembered. He headed to Japan where he spent more than a year in the country doing schooling and training along with his regular job working on heavy equipment for the U.S. Army.  “I was a mechanic and helped repair ‘Cats,’ road graders and skidders,” he said.

When his tour of duty with the Army was up in 1955, he got his discharge papers and headed back to Iowa. Adams was able to go back to college, supporting himself with odd jobs. “I worked for a church and taught school for a while,” he explained. “I also worked for a mobile home manufacturer, too.” He moved to Fairmont in 1966.

One of life’s biggest achievements for Adams didn’t have to do with the military or traveling the world. He said it’s being a Boy Scout. “I’m a 40-year Scouter,” he said. The Army veteran joined scouts in 1978 when his son joined the Cub Scouts. “I became a Scout Master and worked many years at Boy Scout camps,” Adams said. He still wears his Boy Scout uniform to special events.
Posted by Joseph Kreiss Photography at 2:42 PM No comments:

Joseph Kreiss Photography
I've been a photographer since before high school and have had a camera in my hand at one time or another professionally for the past 35 years. I'm currently establishing freelance accounts in the Midwest. I am available for special events, action adventure sports, and Agriculture and farming news and feature coverage, as well as non-traditional portraiture, specializing in athletes, artists and musicians. I also specialize in railroad and industrial-type photography. Please visit my website. www.josephkreissphotography.com. ALL IMAGES INCLUDED IN THIS BLOG ARE COPYRIGHT 2015 JOSEPH KREISS PHOTOGRAPHY. ANY USE WITHOUT EXPRESSED PERMISSION IS PROHIBITED!